On Wednesday of this week the Federal Reserve increased its benchmark federal funds rate by 0.75%, the largest single rate increase since 1994. The fed funds rate now stands at a range of between 1.5% and 1.75%. Fed officials expect the Fed to raise rates to at least 3% this year, with at least half of them indicating the fed funds rate may need to rise to 3.4% this year with rate hikes expected into 2023. Due to the clear connection between monetary policy and global economics and financial markets we feel compelled to provide clients with some insights and our current view of the landscape.

The Fed has seemingly changed its tone in recent days, taking a much more assertive stance toward bringing inflation down to its target level. This hawkish pivot is remarkable in that it appears to be driven by: 1) headline inflation and 2) a single monthly data point (the May CPI report released June 10th). These two elements represent a major deviation from 40 years of Fed policy. Historically the Fed has emphasized core inflation, and the trend thereof, which excludes the more volatile categories of food and energy prices. Changes in food and energy prices are more volatile and often related to temporary factors. For instance, environmental factors can influence agricultural commodity prices and fluctuations in OPEC production targets impacts energy prices in the near-term.
Both are examples of supply side stresses unrelated to trend changes in the economy’s overall price level and therefore not historically a material factor in monetary policy decisions.

The image below shows the headline (all items) CPI index rising 8.6% for the 12 months ending in May, the largest 12-month increase since December 1981. The core (all items less food and energy) index rose 6.0% over the last 12 months, although it has fallen for the last two months including a decline from a 6.2% reading in April.

What does all of this mean and why is it important? Powell and his colleagues appear to be placing a larger focus on fighting headline inflation given trends in core data and narratives coming out of the Fed. Their preferred measure of core PCE has been declining since March.

The Fed’s words and deeds suggest there is some tangible anxiety about the overall price levels and the perception that they have been well behind the curve. Powell blurred the concepts of core and headline inflation at his post FOMC press conference this week. As a result, markets are needing to factor trends in both headline and core inflation measures with a need for both to cool for the Fed to slow down the removal of accommodation. This will require food and energy prices to decline which are being driven overwhelmingly by the conflict in Ukraine. Supply side issues across commodity markets (grains and oil) need to begin to show healthier and improving trends for headline inflation to abate. 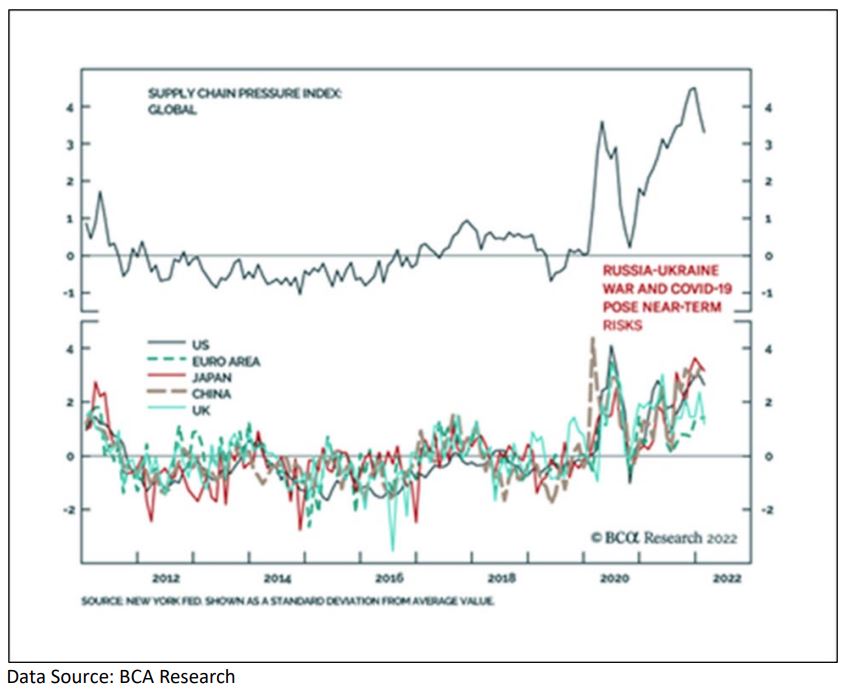 Increasing rig counts, refining capacity utilization, and energy alternatives to Russian oil need to materialize before the global economy weakens and unemployment begins to tick higher. Very elevated crack spreads have EIA expectations for an increase in refinery utilization to average 96% this summer is expected to take some pressure off gas prices but reduced overall refining capacity since the beginning of the pandemic has complicated the backdrop.

Additionally, Russia and Ukraine are both major exporters of wheat. The war has disrupted the normal farming and export cycles, driving wheat prices up more than 50% since a year ago. The prices of many other foods, ranging from grains to meats and oils have risen dramatically in recent months.

Although the market’s expectations for inflation (observable via TIPS break-even rates or 5-year forward inflation swaps) remain anchored at 3%, the University of Michigan Surveys of Consumers year-ahead inflation rate was 5.4%, up from 4.2% a year ago. The expectation for the next five years is 3.3% annually. This has clearly impacted Powell’s pivot to increasing hawkishness. Awareness of consumer sentiment becoming a major component of the Fed’s calculus suggests it needs to be scrutinized more closely by market participants, by extension. At his news conference, Powell said the Michigan survey helped push the central bank away from a 0.5% increase that had been expected only a week earlier. The Michigan Consumer Sentiment Index comes out twice each month, once in a preliminary reading, and then, two weeks later, in final form. The final Michigan reading this month comes out June 24th, two days after Powell presents his Monetary Policy report to the Senate Banking Committee. The Michigan survey is directly correlated with food and energy prices, essentially representing another pivot to headline inflation from core. 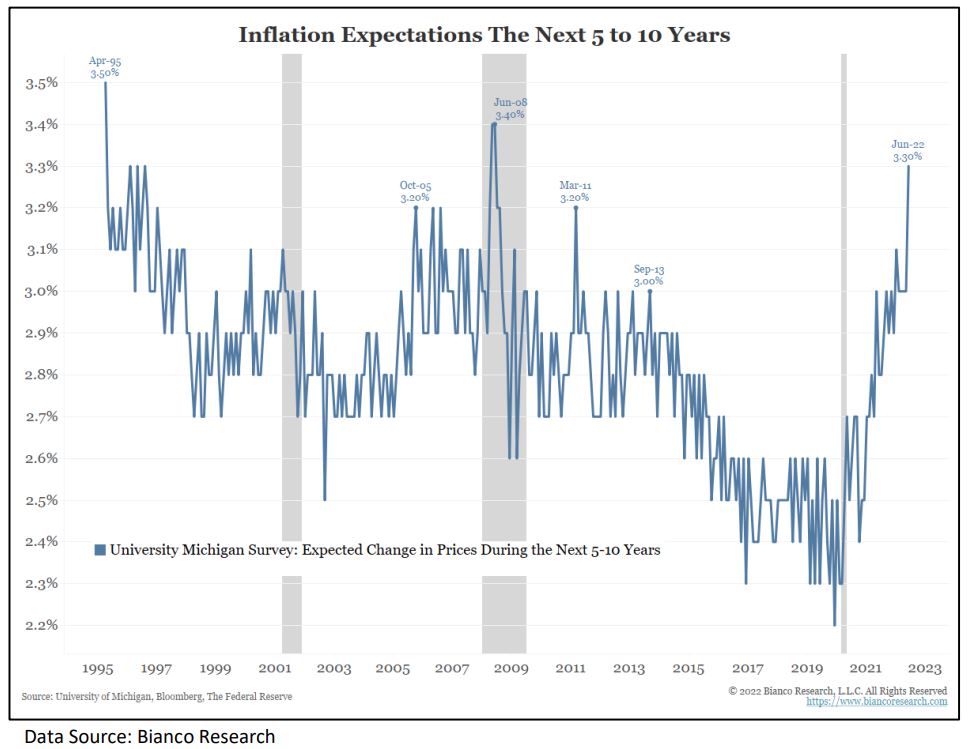 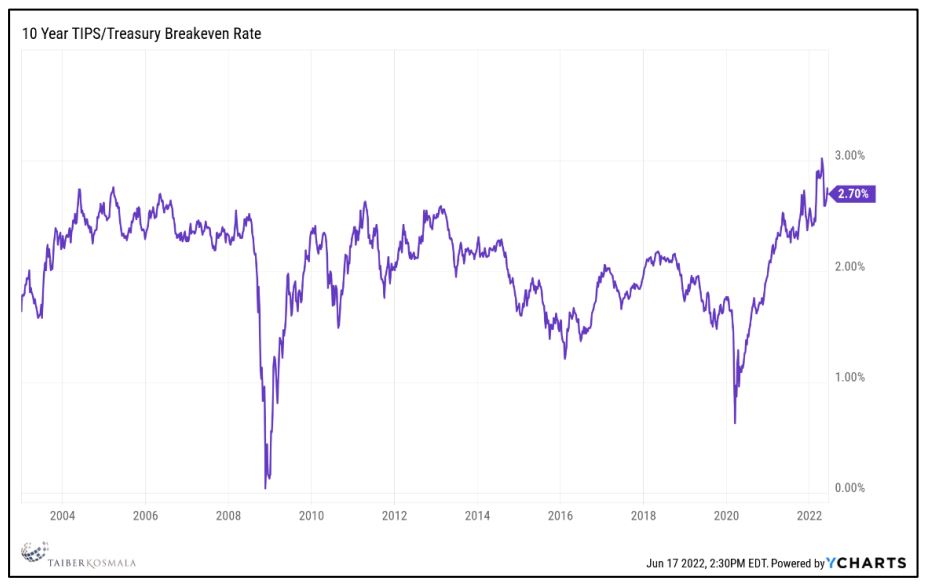 Finally, the trajectory of Federal Reserve rate hike forecasts this year have risen from 65 basis points in December 2021, to 175 basis points in March, to 341 basis points this week. It appears markets have lost confidence in the Fed’s forecasting abilities; hence, rate uncertainty and attendant equity volatility will persist until energy and food prices begin to decline.

As calendar year 2022 commenced, consumer balance sheets were strong, and savings abundant. Corporate revenues and profit margins were also vibrant. The market is clearly pricing in declining economic activity in the form of significant compression in P/E multiples because of the inflation backdrop and increasing central bank hawkishness. The S&P 500’s P/E multiple has compressed by about 22%, nearly equal to the decline in the index. 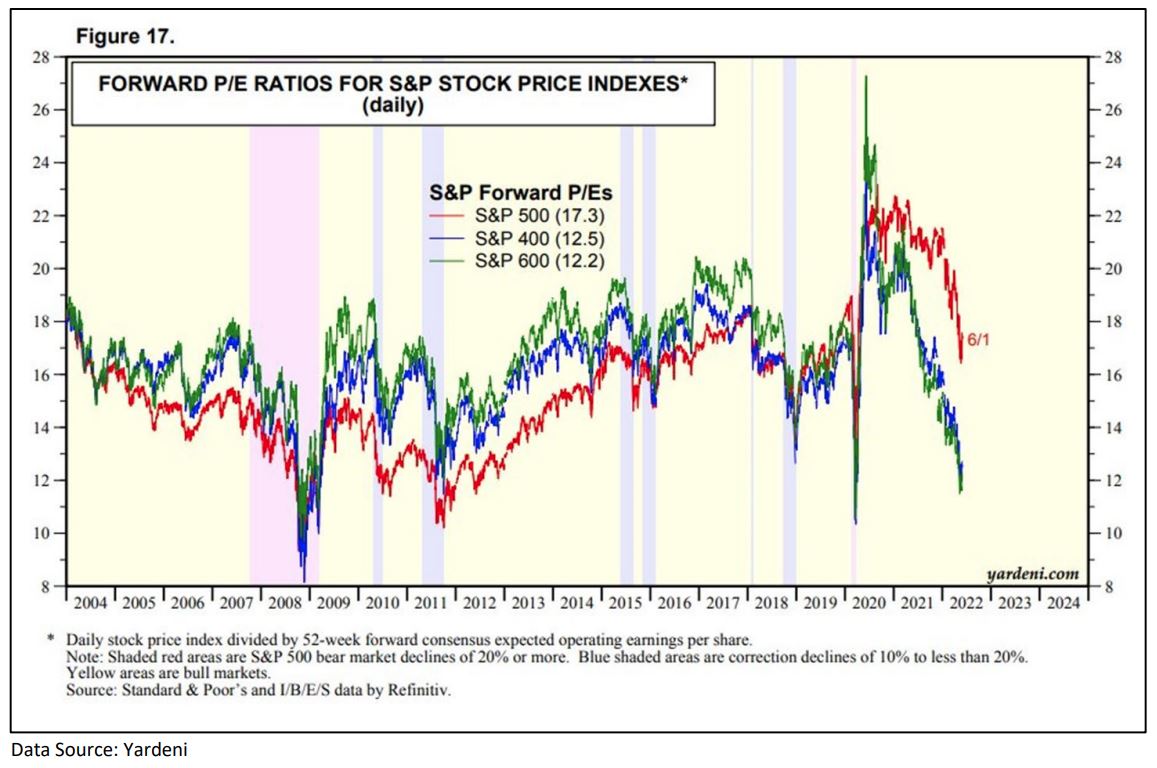 Although recession indicators are still not flashing an imminent decline in economic growth, the odds of that occurring have risen in recent weeks. Given the Fed’s recent focus on headline inflation (which it cannot control outside of intentionally orchestrating a recession), the odds of them engineering the ‘soft landing’ have fallen,
leaving markets on edge.

There have been two bear markets in history which proceeded to fall notably after the initial ‘bear market’ 20%+ correction, 1973-1974 and 2008-2009. In both cases the U.S. economy fell into very deep and persistent recessions. If the Fed can engineer and maintain a modest economic backdrop as supply chains heal including supply side responses in both food and energy markets, equity markets (particularly emerging markets) are attractively priced when viewed over the intermediate term (1-3yrs) as the historical data below reminds us. That said, the bear market is here but potentially incomplete due to a likely decline in corporate profitability (rising rates, profit margins) and a persistent tax from high inflation. 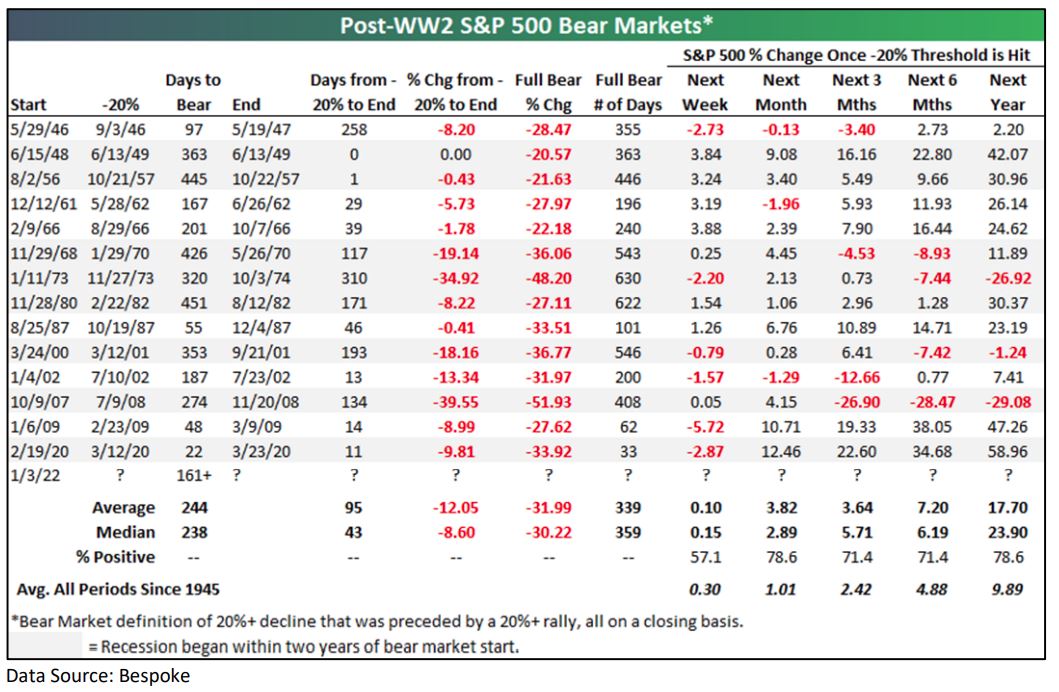 Bond yields probably overshot in the near term given the increased odds of recession which leads us to a moderately cautious stance on credit and neutral duration guidance from an interest rate risk perspective. In the end, trading in volatile markets is exceedingly difficult and should be minimized. Minor tactical rebalancing to maintain proper asset class exposures is advisable with equity markets now officially in bear market territory and bond markets off to their worst calendar year start on record.

This communication is provided for informational purposes only and is not an offer, recommendation or solicitation to buy or sell any security or other investment. This communication does not constitute, nor should it be regarded as, investment research or a research report, a securities or investment recommendation, nor does it provide information reasonably sufficient upon which to base an investment decision. Additional analysis of your or your client’s specific parameters would be required to make an investment decision. This communication is not based on the investment objectives, strategies, goals, financial circumstances, needs or risk tolerance of any client or portfolio and is not presented as suitable to any other particular client or portfolio.

Receive our market reports directly to your inbox.

You have Successfully Subscribed!